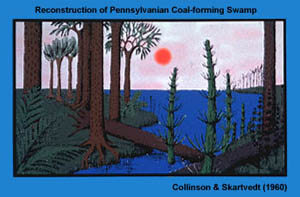 Coal is an extremely complex heterogeneous material that is difficult to characterize. Coal is a rock formed by geological processes and is composed of a number of distinct organic entities called macerals and lesser amounts of inorganic substances - minerals. The essence of the petrographic approach to the study of coal composition is the idea that coal is composed macerals, which each have a distinct set of physical and chemical properties that contol the behavior of coal. The term was first introduced by Dr. Marie Stopes who said that "These organic units, composing the coal mass I propose to call macerals, and they are the descriptive equivalent of the inorganic units composing rock masses and universally called minerals, and to which petrologists are well accustomed to give distinctive names."

This section is composed of photomicrographs of just a few of the most common macerals in coal and is meant only to serve as an introduction to coal petrography.

Vitrinite macerals are derived from the cell wall material (woody tissue) of plants, which are chemically composed of the polymers, cellulose and lignin. The vitrinite group is the most abundant group and commonly make up 50 to 90% of most north American coals. However, most Gondwanaland coals and some western Canadian coals are vitrinite poor. The inertinite macerals dominate in these coals.

Matrix vitrinite is almost always the most abundant maceral present and makes up the groundmass in which the various liptinite and inertinite macerals are dispersed. It has a uniform gray color and it is always anisotropic. With ultra-violet excitation some normal vitrinite will fluoresce.

The most outstanding feature of pseudovitrinite is that it always has a slightly higher reflectance than the matrix vitrinite in the same coal. It also tends to occur in large particles that are usually free of other macerals and pyrite. Pseudovitrinite particles commonly show brecciated corners, serrated edges, wedge-shaped fractures, and slitted structures. Pseudovitrinite does not usually fluoresce with ultra-violet excitation.

The liptinite macerals are derived from the waxy and resinous parts of plants such as spores, cuticles, and resins, which are resistant to weathering and diagenesis. They generally make up about 5 - 15% of most North American coals. They are usually more abundant in the Appalachian coals than any other U.S. coals except cannel and boghead types where they dominate. At a reflectance of 1.35-1.40 most of the liptinite macerals disappear from coal. Cannel and Boghead coals are petrographically distinguished from humic coals by both their maceral composition and texture. They have an abundance of liptinite macerals (sporinite in cannels and alginite in bogheads) and a paucity of vitrinite and inertinite macerals.

This is the most common of the liptinite macerals and is derived from the waxy coating of fossil spores and pollen. It generally has the form of a flattened spheroid with upper and lower hemisphere compressed until they come together. The outer surface of the sporinite macerals often shows various kinds of ornamentation. It should be noted that in sections that are parallel or near parallel to the bedding plane of the coal, the sporinite macerals will appear to take on a disc or oval shape that can be confused with resinite. In Paleozoic coals two sizes of spores are common. The smaller ones, usually <100 microns in size are called microspores and the larger ones ranging up to several millimeters in diameter are called megaspores. Sporinite is also classified on the basis of the thickness of the spore walls -- thin-walled (tenuispores) and thick-walled (crassispores). Spores formed in a sac (sporangium) on the original plants in which they were compressed into tetrahedral groups of four. Evidence of this formation can sometimes be seen under the microscope as a trilete scar on the surface of the sporinite.

While not very abundant, this maceral is commonly found in most coals and is derived from the waxy outer coating of leaves, roots, and stems. It occurs as long stringers, which often have one surface that is fairly flat, and another surface which is crenulated. Cutinite usually has a reflectance that is equal to that of sporinite. Occasionally the stringers of cutinite are distorted. Because cutinite occurs in sheet-like fragments and is very resistant to weathering, it is sometimes is concentrated in weathered coals to which it gives a sheet-like appearance. Such coals are called paper coals.

Resinite macerals are ubiquitous, though minor, components in most American coals below medium-volatile bituminous rank. They are usually absent in coals of higher rank. Although resinite macerals usually make up less than 3% of most U.S. coals, they are particularly abundant in coal of the Wasatch Plateau in Utah where they can account for as much as 15% of the macerals present. Resinite macerals have two common modes of occurrence. In most Appalachian and mid-western U. S. coal seams resinites occur as primary (present at the time of deposition) ovoid bodies with a long axis ranging from 25 to 200 micrometers. While primary ovoid bodies of resinite are also found in western U.S. coals of Cretaceous/Tertiary age, much resinite in these coals occurs as secondary cleat and void fillings. This secondary resinite shows an intrusive relationship to the host coal and often shows flow texture and carries xenoliths of coal in resinite veinlets. Fluorescence microscopy reveals that only the primary resinite ovoids commonly show "oxidation" or "reaction rims" that suggest a surface alteration. Fluorescence spectral analysis can usually distinguish resinite from other macerals and in most cases it can also distinguish between different resinites.

The inertinite macerals have the highest reflectance of all the macerals and are distinguished by their relative reflectances and structures.

Fusinite is seen in most coals and has a charcoal-like structure. Fusinite is always the highest reflecting maceral present and is distinguished by cell-texture. It is commonly broken into small shards and fragments.

Semifusinite has the cell texture and general features of fusinite except that it is of lower reflectance. In fact, semi-fusinite has the largest range of reflectance of any of the various coal macerals going from the upper end of the pseudovitrinite range to fusinite. Semi-fusinite is also the most abundant of the inertinite macerals.

Macrinite is a very minor component of most coals and usually occurs as structureless ovoid bodies with the same reflectance as fusinite.

Micrinite occurs as very fine granular particles of high reflectance. It is commonly associated with the liptinite macerals and sometimes gives the appearance of actually replacing the liptinite.